Posted on January 21, 2012 by meredith
This year’s drive from Cabo San Lucas to Loreto includes a stop in the town of Todos Santos about 45 kilometers north on the coast road carved into the hills and often overlooking the Pacific Ocean. The official website for the town is http://www.todossantos.cc/.
Todos Santos is the home of the Hotel California, famous for the song of the same name by the Eagles. The last time visiting there, I heard one of the folks saying, “This hotel has nothing to do with the song.”
But that’s exactly the reason why most people (of a certain age) drive up here! Duh.
The road from Todos Santos to La Paz, the Baja’s capital, is four wide lanes of modern highway. A change from some of the washboard dirt roads that snake over the gravel to the beaches.
When I drove up here with my daughter Erin in 2010, we navigated the incredibly bumpy back roads to see what we could see. One beach, desolate and gorgeous, sloped down to the hissing foam of the waves that curled under with tremendous power and pulled away again. Did you ever hear that hollow, muffled sound of a great wave crashing onto the sand? Amazing . . .
Erin and I gathered a few shells and stones, enough to fill our pockets and my hat. 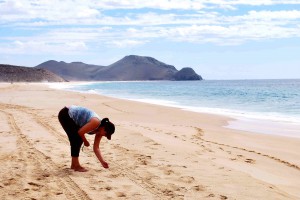 finding shells and special stones on a beach in Todos Santos

Before heading back to the car, we talked with an older couple from Colorado  who stopped to say hello. Their son lives here now year round. They visit as often as they can.
I got used to Americans everywhere. For a while I felt that these encounters were ruining my Mexican exeperience, but actually it felt heartwarming to meet people who were as in love with the Baja as I am.

Next stop driving south again is the El Cerritos Beach Club, which is a happy place that combines surfers, families, and ex-hippies on a beach that redefines your life the moment you get there. The sand and your toes become one as you look out towards the horizon at a couple of fishing boats making their way into a harbor somewhere. Where the land meets the ocean off to the right, a massive rocky face holds back the force of the current as it crashes against it.  I actually felt afraid . . . for a second. Then secure that cliff had been withstanding this onslaught of ocean for millions of years. 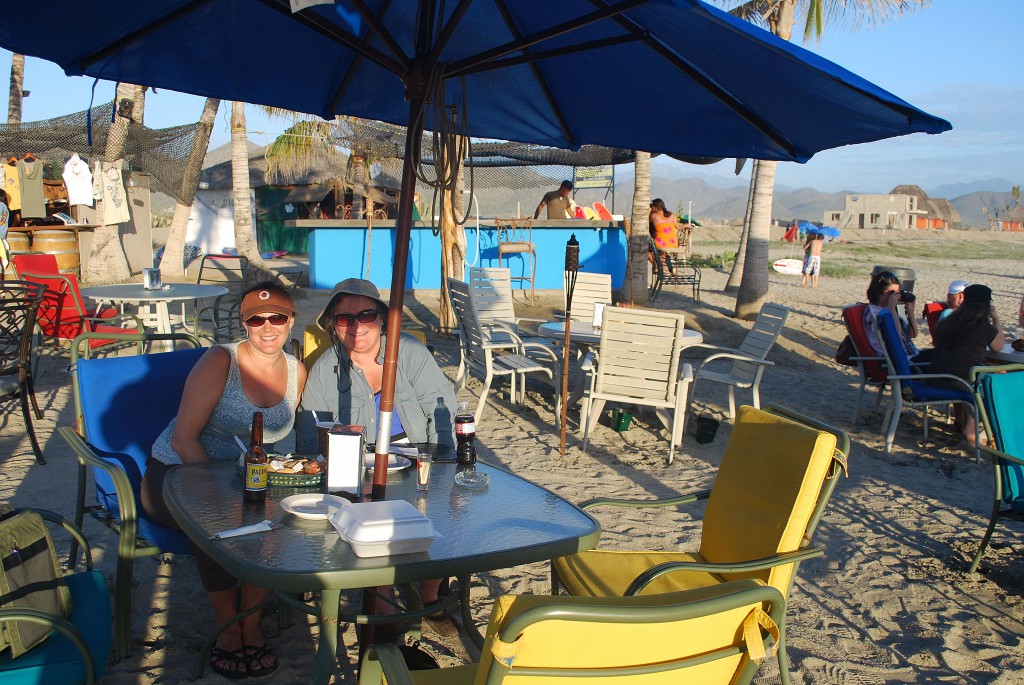 Taking time out from driving back to Cabo.

Born in Rhode Island, Meredith now lives in Takoma Park, Maryland. She wrote her first poem, "Leaves," in third grade at the Quidnick School shortly after her good friend Bradley got spanked with a wooden ruler behind the upright piano by Miss Barr who to this day fills our dreams with scary images. To read more from Meredith, visit www.meredithpond.blogspot.com. Thanks for visiting!!
View all posts by meredith →
This entry was posted in Baja and tagged Baja travel, Baja vacations, Gray whales. Bookmark the permalink.