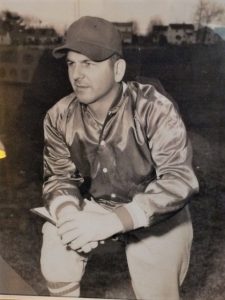 Today’s all memories. Dad passed away more than decade ago early in the morning while I was still asleep a few miles away at the Anchor Motel at Scarborough beach.

The night before, at his home in Coventry, I sat beside him and we watched a great ball game on tv–the Red Sox trounced the Baltimore Orioles. At that point, he had been in hospice care for only a day. He told me the doctors said there was nothing they could do for him and sent him home. “I want to die in my own bed,” he said.

And that was that.

I forget who called me, but I drove back to the house in time to be with his body for a little while as Dad lay there under the covers, and we waited for Ianotti’s Funeral Home to come over. Two fellows drove up in a station wagon with a gurney and a canvas stretcher rolled up like a small flag pole. Odd details. A gray day, slate sky, raining softly. Trying to keep the raindrops off dad’s face as they carried him outside. The back of the wagon had some flowers and bulbs and garden tools, as if they might bury him deep in a garden somewhere nearby.

My sister delivered a bowl of new baseballs and magic markers to dad’s wake. Family and friends wrote personal notes to Dad on the baseballs so when the day of the funeral came all these baseballs rolled around in the bottom of dad’s casket, a light blue casket with embossed seagulls all around. The most special baseball, with a note from his grandson Derrick, was placed under dad’s hands. As our family greeted those who came to pay their last respects, we heard stories of 1957, the year Dad coached the Coventry High School baseball team to a Division Championship. We heard how they loved Ted Williams Baseball Camp when dad was coaching there, and how he and Ted Williams were friends. We heard how, along with our mother, he taught so many local children to swim at Lake Tiogue.

Next door to dad’s wake that evening, a solemn service with a full honor guard was under way for the first young woman from Rhode Island to die in Iraq. Like dad, she too would be buried at the Veteran’s Cemetery in Exeter within the week.

Some of his friends called my Dad “Teddy Mac.” In the photo above, he’s on the ballfield after practice near our house. He coached the Coventry High School baseball team to a Division championship in 1957. Very big deal back then. I think there was a parade for the team! More importantly, Ted Ciesla coached the team fairly, he made sure to give kids a chance to play. No matter their skills at the plate or in the field, if kids showed up after school to practice, then later on they donned their CHS red and white uniforms for real games. They rode the bus to away games as far away as Westerly. I got to be the bat girl for the team’s home games. A third grader, I sat with the team on the long bench behind first base. Every time a player up to bat made a hit, I ran for the dropped bat and returned it to its place.

Recently, I heard from my sister that there’s something in the works to honor Dad in the local Hall of Fame. He deserves the recognition because first and foremost he gave kids a chance to play ball even if their skills were not that great. With my Dad as team coach, every kid had a chance . . .

Born in Rhode Island, Meredith now lives in Takoma Park, Maryland. She wrote her first poem, "Leaves," in third grade at the Quidnick School shortly after her good friend Bradley got spanked with a wooden ruler behind the upright piano by Miss Barr who to this day fills our dreams with scary images. To read more from Meredith, visit www.meredithpond.blogspot.com. Thanks for visiting!!
View all posts by meredith →
This entry was posted in family. Bookmark the permalink.